Giatec Named Top Growing Company by the Globe and Mail 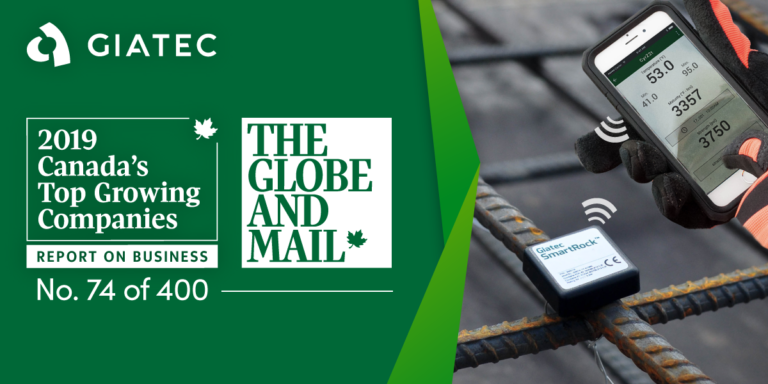 OTTAWA, Canada, September 27, 2019 (Newswire.com) – Giatec Scientific Inc. is pleased to announce they have placed No. 74 in the inaugural Report on Business ranking of Canada’s Top Growing Companies. This list ranks Canadian companies on three-year revenue growth. Giatec earned its spot with a three-year growth of 705%. The recognition comes two weeks after Giatec was recognized by Canadian Business and Macleans in their 2019 Growth 500 List, ranking No. 103.

Concrete is the second most-consumed material on the planet next to water and Giatec has become the recognized world leader in concrete testing technology. Founded in 2010, Giatec has leveraged advanced technologies such as; Artificial Intelligence (AI), and Internet of Things (IoT) solutions, including; wireless concrete sensors, mobile apps, and advanced non-destructive technologies (NDT). With this technology, they have helped the construction industry redefine business models and value propositions by turning concrete testing into a process which speeds up construction, rather than slow it down. As a result, their products have won numerous industry awards and have been used in over 4,200 projects worldwide, across 80 countries.

“We are honored to be recognized as one of the top growing companies in Canada by The Globe and Mail. As the world leader in IoT solutions for the construction industry, our team is dedicated to offering solutions for building concrete structures faster, safer, and more economically,” said Paul Loucks, CEO, Giatec.

Launched in 2019, the Canada’s Top Growing Companies ranking program aims to celebrate entrepreneurial achievement in Canada by identifying and amplifying the success of growth-minded, independent businesses in Canada. In total, 400 companies made the ranking this year. The full list of 2019 winners, and accompanying editorial coverage, will be published in the October issue of Report on Business magazine.

“We created the Canada’s Top Growing Companies program because we believe there is much Report on Business readers can learn from the successes of the country’s best entrepreneurs,” says Derek DeCloet, Editor of Report on Business and Executive Editor at The Globe and Mail. “We’re excited to be telling their stories.”

“The 400 companies on the inaugural Report on Business ranking of Canada’s Top Growing Companies demonstrate ambition, innovation, and tremendous business acumen,” says Phillip Crawley, Publisher and CEO of The Globe and Mail. “Their contributions to the economy help to make Canada a better place, and warrant commendation.”

About Giatec:
Headquartered in Ottawa, Canada, Giatec is driving new innovations in concrete testing; improving methodologies and raising standards by bringing real-time data collection to the forefront of every jobsite. Our suite of hardware and software products analyze data throughout concrete’s lifecycle during design, production, delivery, placement, and service. Giatec continues to invest in the research and development of revolutionary technologies (Internet of Things, Artificial Intelligence, etc.) for applications within the concrete and construction industries.