150 Years of Construction in Canada Celebrating Innovations in Concrete and Construction

Gone are the days of horse-drawn carts and unpaved roads. Before ready-mix trucks were invented, concrete construction was driven by horse power. In those times, horses would trek rugged terrain with carts straddled behind them, transporting concrete. These carts were equipped with a not-too-distant innovation similar to the spirals found in the mix trucks of today. The horse-drawn carts featured wooden paddles that would churn the concrete mix for consistency, deriving energy from the wheel rotations as the horses moved.

We’ve come along way since pioneer technology. To commemorate 150 years of nation-building in Canada, here is a snap shot of the significant landmarks, innovations, and projects that transformed construction practices. 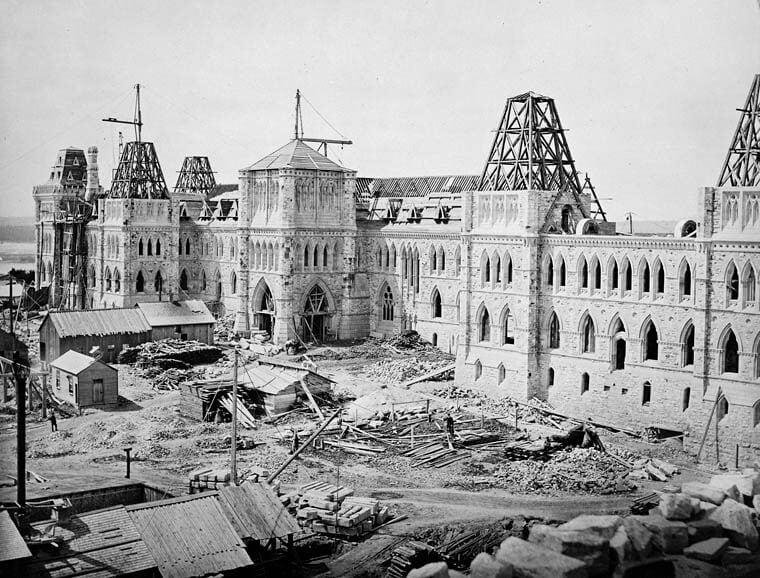 1866: The Official Opening of Canada’s Parliament in Ottawa

The process of uniting Canada’s provinces and territories into one nation was welcomed with the construction of the parliament Buildings in Ottawa. In the 1860s, [the building of parliament] was the largest North American construction project ever attempted by Public Works Canada. Stone and wood were the primary building materials for the parliament buildings, however, due to a destructive fire that engulfed the Centre block in in 1916, the building was rebuilt using concrete and reinforcing steel.

1920s: The Invention of Alkali-resistant Cement

Concrete degradation became a pressing problem that disproportionately affected infrastructure in Western Canada. Sewage systems and public structures were crumbling due to concrete corrosion. Unaware of the cause and solution to the problem, the National Research Council worked with a notable chemist, Thorbergur Thorvaldson and his colleagues, to find a solution. Thorvaldson’s research led him to develop an alkali-resistant cement, a hallmark innovation for construction. A boom in Canada’s economy during the 1950s and 60s allowed for generous spending on large-scale construction. Building the Trans-Canada Highway was one of the key infrastructural project undertakings of the Golden Age of Infrastructure. 7,821 kilometers (4,860 miles) of highway stretching from Victoria, British Colombia to St. Johns, Newfoundland was completed in 1962.

Did you know that the Trans-Canada Highway broke the record of the longest undisrupted highway in the world?

The Department of Northern Affairs and the National Research Council of Canada (NRC) undertook extensive research dedicated to permafrost and cold-weather concreting. Findings reported in The Canadian Snow Survey and The Glossary of Permafrost and Related Ground Ice Terms have greatly improved engineering and construction practises in roads in Canada’s artic. Building practises have drastically improved after years of investigative research on corrosion and harsh weather. Taking another direction in favour of sustainability and long-term durability was at the heart of building the Canal Bridge near Cornwall Ontario. The Canal connecting Ontario to New York was built with a new class of concrete that is expected to last over 100 years. Ottawa Startup, Giatec Scientific disrupts the concrete industry with wireless concrete strength and maturity sensors and NDT devices for concrete testing. SmartRock2™ is the first fully embedded sensor placed in a concrete structure for real-time monitoring of temperature and strength. SmartRock™ sensors have been used in projects all over Canada and the world including the repair works of highway 417 between Ottawa and Montreal.