Make Your Construction Jobsite Safer and Faster with Smart Sensors 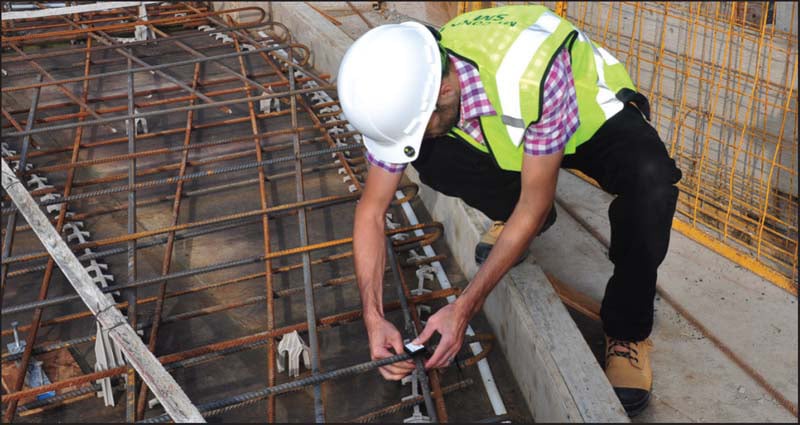 Sensors embedded in concrete let you know when it's cured and ready.

Concrete is the material most widely used by humans — after water. As its ingredients are readily available almost anywhere in the world, it is the main component used by architects and engineers in the building of foundations, multi-story and high-rise structures, bridges, dams, and roads. With concrete playing such an important role throughout the globe, the longevity and strength of these structures is paramount.

The strength of concrete is governed by a set of chemical reactions that occur under favorable curing conditions between cement and water during the first few days after mixing. This leads concrete to transition from a liquid-like material to a solid that can take any shape and form. Recent advancements in sensor technology have made it possible for this critical step in a construction project to be accurately monitored in real time.

Concrete strength is the main parameter that determines if important construction operations, such as formwork removal, saw cutting, and opening a road to traffic can be safely initiated. Catastrophic structural damage can occur if these actions are performed before the material has gained enough strength. Conversely, delaying these construction steps has significant financial implications for a project. Therefore, it is important to estimate concrete strength as accurately and quickly as possible.

Strength has been traditionally calculated by breaking sample cylinders cast from the same concrete material used for the building of a structure. In fact, using compression to test concrete strength has existed since the late 19th century. Today, this method still dominates construction sites, even though it causes delays, since cylinders have to be transported offsite to a laboratory for testing. Moreover, one sample cannot accurately account for local variations across the structure. As a result, data measurement errors can occur, which often creates even more delays.

To address these limitations, researchers have developed various approaches to monitor the strength of in situ concrete. Among these, is a methodology called “Concrete Maturity.” This requires constant monitoring of concrete temperature on a jobsite in order to determine the maturity index — a function of temperature and time. This data is then correlated to concrete strength based on a pre-calibrated curve, which is developed in a testing laboratory.

Although the maturity concept was developed in the 1950s it has not been widely adopted across the construction industry. With first generation solutions, such as hardwired sensors, crews faced challenges with their onsite functionality and struggled to protect thermocouple cables within the concrete. In recent years, however, Internet of Things (IoT) advancements in electronics, such as the development of low-energy and long-range Bluetooth, as well as improvements in smartphone and mobile apps, have helped engineers develop wireless sensors that can be easily integrated into the construction workflow. This allows project managers and site superintendents to monitor the curing and hardening of concrete on the go.

Embedded Sensors Let You Know When Concrete Has Fully Cured

A typical construction jobsite has many moving parts and support must be provided to project managers for quality control to be conducted seamlessly. It is therefore essential that concrete strength sensors be fully embedded within a structure in order to protect against potential damage and eliminate the need for maintenance. The SmartRock™ wireless concrete sensor from Giatec Scientific, Inc. (Ottawa, ON, Canada), for example, is a wireless maturity sensor that is installed and secured on rebar by twisting two metal wires. The sensor is powered by a coin-cell lithium metal battery, which provides enough power for about 4 months — more than enough for monitoring concrete properties during early-age construction. The metal wires used to attach the sensor to the rebar also close an electrical circuit that turns the device on. Once concrete is poured, the sensors are completely covered and are secured inside the structure where they continuously monitor and record temperature. The temperature sensor is a thermistor with a measurement accuracy of 0.5 °C. Temperature data is wirelessly transmitted using a custom Bluetooth profile.

A SmartRock iOS or android app installed on a smartphone receives temperature signals that have been recorded every 15 minutes on the sensors. The app downloads the temperature data and uses an algorithm to calculate concrete maturity and strength based on a database of pre-calibrated concrete.

Typically, multiple sensors are installed in the same pour in different structural locations to capture local variations in concrete strength. For example, a beam or slab that is exposed to cold winds could gain strength much more slowly than sections that are protected from the elements. The app displays detailed information from each of the sensors. The data from each smartphone can also be transmitted to a cloud application where it is analyzed automatically and compared against a set of criteria based on the end-user requirements. As soon as the criteria are met, a push notification is sent from the cloud to the team members to notify them about the status of the concrete structure so they can make a decision on the next steps of their project.

Collecting and sharing real-time data concerning the strength of in-situ concrete helps construction managers make immediate and early decisions on when to move ahead to the next steps of their project schedules. This saves significant costs, as each day saved on a jobsite is worth upwards of $15K. Furthermore, the consistent monitoring of in-situ strength enhances safety on the jobsite.

Smart sensors are the first wave of technologies that are transforming the traditionally old-fashioned construction industry. During several decades in the concrete lifecycle, there are various types of measurements and data that are required for stakeholders, such as engineering firms, concrete producers, construction companies, structural inspectors, and owners and operators, to make informed decisions. For example, concrete mix consistency from one truck to another, variability of water content in concrete mixes, risk of earlyage concrete cracking, and state of deterioration in the structure during its service life. Water content, setting time, shrinkage cracking potential, humidity and moisture levels, and rebar corrosion rate are only some of the important measurements. The existing measurement methods are time-consuming, not accurate, and provide delayed results at best. A new generation of IoT solutions leverages non-destructive test methods based on the electrical resistivity measurement and electrical pulse response analysis to provide instant results in real-time on the condition of concrete materials and structures. Accurately accounting for these elements allows for a more thorough understanding of the concrete life-cycle. Monitoring of these elements will therefore improve the quality, durability, and safety of infrastructures, as well as allow for schedule optimization.

Information from the SmartRock app can also be integrated with other construction management software applications such as Procore® — the world's most widely used construction management software — which, through the use of advanced APIs, allows developers to integrate with each other's solutions. The Procore dashboard can then automatically create tasks for the project team members.

The Future of Wireless Sensing for Concrete Construction

It is imaginable that the massive amount of sensor data that is now easily collected, can be analyzed to provide deeper insights into the performance and predictability of concrete properties. Since the world's infrastructure has been built by concrete, knowing all we can about this unique and ubiquitous material, benefits the construction industry and all of society.

Note: This article was originally published in Tech Briefs Magazine. Check it out here.

With over 15 years of experience in the concrete materials industry, Dr. Aali Alizadeh brings unique expertise on the durability of concrete tackled at the nano-level, particularly related to infrastructure exposed to harsh environmental conditions. In addition to being named one of Ottawa's Top 40 Under Forty entrepreneurs of 2018, he was awarded the Governor General's Academic Gold Medal. Read Aali Alizadeh, PhD, P.Eng. | CEO and Co-Founder full biography to learn more about his Awards and Accomplishments, Patents and Education in Civil Engineering. Dr. Aali R. Alizadeh has numerous publications, click here to see his Google Scholar profile.