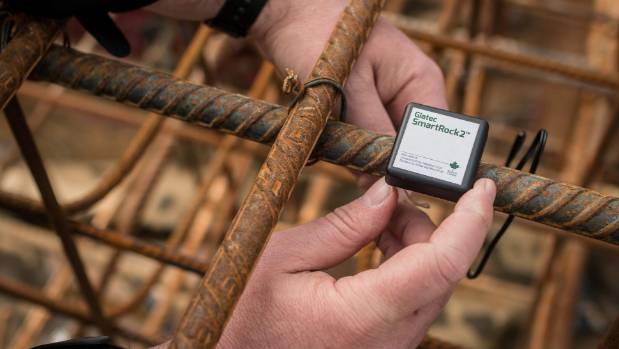 Christchurch-based manufacturer and supplier of concrete technologies, Canzac, has introduced sensors that can be buried in concrete to measure strength and humidity.

Founder Lance Canute said most people don't think too much about concrete even though it is used everywhere for houses, warehouses, hospitals, schools, apartment buildings, wastewater treatment plants and bridges.

"It's been used for thousands of years and it's the single most widely used building material in the world but it's not always as easy to work with as people would expect."

When the main ingredients, cement aggregates and water, are mixed together a series of chemical reactions occur and timing becomes a key factor.

It can be difficult to judge when concrete reaches the desired strength and humidity, which is where the sensors come in.

Canute said they can cut down the amount of time before form work can be stripped off the concrete construction, whether it's a floor slab or a tilt sab panel.

Being able to reduce the curing time by a week can make a huge difference to the pace of work on a project, he said.

The sensors are tied to reinforcing steel within the concrete slab or formwork which enables wireless and continuous monitoring of concrete temperature and strength using wireless technology to transmit data to a smartphone application.

Usually, field technicians cast test cylinders which are sent to the lab for analysis but they are not always accurate.

"Contractors using this new sensor technology know in real time if their concrete has reached the tight strength."

Canzac has the local distribution rights for the Canadian-developed sensors and has supplied them to several companies.

Canute describes his 27-year old company as "the engineer behind engineers" on a project.

He and his 25 staff supply a vast array of accessories and systems ranging from reinforcing spacers to different types of crack inducers to pace cracks uniformly.

"People see a crack in concrete and think it's the end of the world. But there are about half a dozen different types of cracks and they don't usually have any structural effect. They can be filled easily with some of our products if required."- Stuff

Read more about Canzac and SmartRock2.